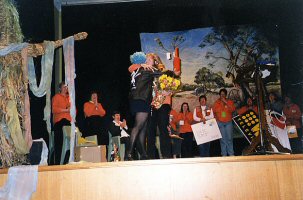 “Celebrating, Challenge, Change and Choice in a New Century”

Marian Woodberry was the Chair of the organising committee.

The Reception and the Gathering Dinner was held at the Greek Hall in Renmark, and the workshop sessions were held at the Murray Institute of TAFE, Berri.

Over 210 women attended from across South Australia and interstate.