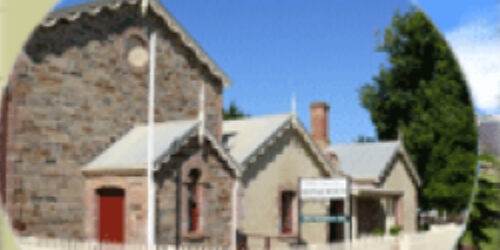 What’s a Furphy, a Tip Dray, the “Solar Flare”?

The former police station (built 1858) and courthouse (added in 1867), feature several rooms set out in the style of the Victorian era, a room reflecting changes in health care over the years, and a courtyard with very high stone walls. From the courtyard, one can access the three jail cells. Displays in the recently refurbished courtroom focus upon the lives of the original inhabitants and the settlers who first came to the district. The Scottish influence is emphasised.

In the yard is an extensive collection of farm machinery from the past, including an excellent example of a furphy, a blacksmith’s shop, horse drawn vehicles and exhibits centering on the history of the local Emergency Services. Notable exhibits include an original horse works and the world-beating high technology solar cycle, the Solar Flare. The Centre also holds a large collection of books, photographs and newspaper accounts of people and past events in Strathalbyn.

Occupational Therapy, have you heard of it?